Writing in The Guardian here… 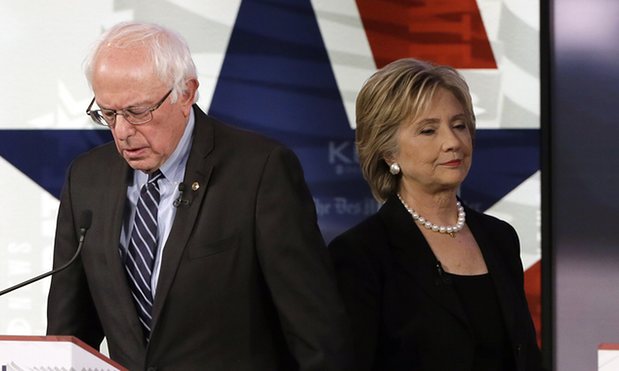 Before Saturday night’s Democratic debates, it would have hardly seemed possible to hold a tone-deaf moment of silence – but John Dickerson of CBS News achieved it. The anchor introduced what should have been a space for quiet contemplation of those killed and injured in Friday’s terrorist attacks by stating “freedom was savagely attacked in the heart of Paris” but then made no mention of the near-simultaneous, brutal attacks by Isis in Beirut.

The inability for even the moderator to recognize Middle East citizens as fellow victims of Isis, worthy of our silent remembrances, helped set up an us-vs-them frame that continued throughout the discussion of foreign policy.

It should come as no surprise Clinton’s voice on foreign policy issues was strong: her last post in public office dealt directly with the implications of violent extremism and terrorism in United State’s foreign policy. What was surprising was monumental failure of either O’Malley or Sanders to present any new vision for America’s leadership in the world even as they were attempting to explain to voters what they would do differently than the former secretary of state.

For instance, when questions were asked about Islamic extremism, Isis and America’s leadership in the region it became clear Hillary Clinton was the only candidate who expressed a functional understanding of Middle East politics, and she was the only candidate who differentiated between violent extremists, Islamists and radical jihadists (yes, those are three different classifications).

Clinton, too, was the only candidate who did not obfuscate when Dickerson asked “Was Isis underestimated?”

And, while both O’Malley and Clinton directly addressed Isis and violent extremism in their opening remarks, Sanders only briefly expressed condolences for the attacks in Paris before pivoting back to the talking point he clings to like a political flotation device: the domestic economy.

Saturday should particularly have been an opportunity for O’Malley to frame his experience in state government to provide context for his vision of his own global leadership. Instead, he gave a meandering, contradictory statements about the role of America in confronting “evil” – a framing device left over from the George W Bush administration.

But also our role in the world, yes, is also to confront evil when it rises. We took out the save haven in Afghanistan but now there is undoubtedly a larger safe haven.

Framing the defeat of Isis as a matter of borders or “safe havens” implies a lack of understanding of the complexity of battling the networked extremism that Isis demonstrated with their coordinated attacks in Paris and Beirut.

More alarmingly, O’Malley’s reference to destroying the safe haven of which Osama bin Laden took advantage in Afghanistan suggests that he knows little of the current threat that Isis poses in Afghanistan: Isis-backed fighters are making inroads in Afghan provinces and are in power battles with Taliban forces.

But the biggest foreign policy disappointment of the debates were the candidates’ suggestions for handling the Syrian refugee crisis. Both Clinton and O’Malley asserted their support for the United States accepting up to 65,000 Syrian refugees – but we currently have only admitted 1,854 and no reference was made to fast-tracking refugees applications or providing additional social services upon their arrival. Instead, the candidates all agreed that the refugees applying for asylum here from Syria should face even more scrutiny than they do now, which would necessarily increase wait times and hardships.

Sanders response to the issue of Syrian refugees particularly felt as if he is completely oblivious to the 6.5 million displaced Syrians, more than 3 million of whom have been granted asylum or refuge in Turkey, Lebanon, Jordan and Iraq – or, as he nonsensically harped “… those Muslim countries [that] are going to have to lead the effort. They are not doing it now.”

Clinton’s quick response to Sanders’ inaccurate assertions reflected the tone and knowledge of a leader who understands the world: “I think that is very unfair to a few you mentioned, most particularly Jordan, which has put a lot on the line for the United States, has also taken in hundreds of thousands of refugees from Syria, and has been, therefore, subjected to threats and attacks by extremists themselves.”

Clinton is often criticized for being more of a technocrat than a natural politician but, if Americans really want to deal with complex problems on an international scale, we need more than simple talking points and simplistic world views from our next president. As Clinton said, we need someone who can “understand the complexity of the world we are facing” – and not try to dumb it down to appeal to our lesser natures. Americans should not settle for something that looks like the exercise of power but is actually the manifestation of fear.