Writing in The Guardian… 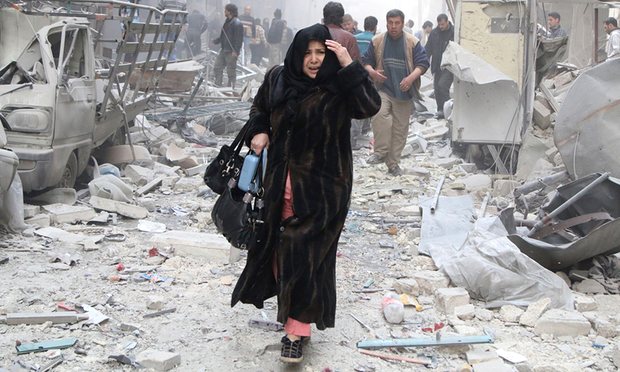 As the Syrian regime, backed by Russian airstrikes, ramped up the siege on Aleppo early this week, UN-led peace talks between the Syrian government and opposition leaders ground to a halt in Geneva on Wednesday.

While the US secretary of state, John Kerry, has described the meetings as the best chance to “chart a course out of hell”, the peace process unraveling surprised few– least of all, the women of Syria who have been largely excluded from each andevery stage of peace negotiations.

The parties that are welcomed at the negotiating table, meanwhile, represent – or bankroll – the very same forces enacting savage blockades which sparked dire humanitarian conditions in Syria, cut off paths to food or medical aid and brutalized women in besieged cities and towns.

After nearly six years of conflict and three cycles of men posturing for peace across Vienna, Paris and Geneva, a disastrous pattern emerges: women are the first affected by war and the last included at crafting peace. This betrays logic – and reveals a profound failure to learn lessons from past conflicts, from theBalkans to Rwanda to Afghanistan, from Colombia to Liberia to Northern Ireland: when women are included in the peace process, it’s more successful.

There is a dissonance to what the Syrian peace talks, known as the Vienna process, have prioritized: the talks are celebrated for their inclusion of all the foreign countries that have backed armed groups and fueled the conflict. Yet inclusion of women whose lives are endangered and derailed by the war remainsan afterthought. While UNSCR 2254 – the security council resolution which set the framework for the talks – calls for the full participation of Syrian women in the newest roadmap for peace, the mechanisms to achieve this remain undeveloped.

The latest attempt to remedy this by the UN’s special envoy for Syria, Staffan de Mistura, came Monday with the announcement of a Syrian Women’s Advisory Board, a designation that directs women’s contributions to the UN-facilitated talks through the scope of civil society. It’s a channel endorsed by UN Women’s executive director but potentially isolated from direct stakeholder negotiations on political transition timelines or ceasefire arrangements with military factions.

With the most recent breakdown in peace talks and Bashar al-Assad’s strengthened position – thanks to Russian support – prospects for a negotiated solution seem bleak in the near term. But without a Plan B, it’s time to explore all tools and options, including a radically inclusive approach to the next round of talks, which the UN expects to resume on 25 February.

UN officials estimate there are more than 486,000 people living under siege in Syria, and nearly 4.6 million refugees struggling in neighboring countries. In London this week, donors are pledging new support for what is now the greatest humanitarian crisis of our generation. While ramping up humanitarian relief – including more gender sensitive programs that meet the needs of women and girls and are designed by and for them – is critical, we all know that humanitarian crises ultimately require political solutions.

To design a peace process where both men and women’s lives are valued equally, we must stop siloing the contributions of Syrian women and learn from those engaged on the ground. From the women who worked to negotiate a ceasefire in Zabadani to female journalists and human rights activists mobilizing their communities, we can draw on countless examples of leadership.

According to the UN, this should be happening already. UN security council resolution 1325 on women, peace and security was drafted 16 years ago. It and subsequent resolutions called for full inclusion of women in conflict resolution and peacekeeping, as well as relief and recovery efforts that would address the needs of women and girls. The Women, Peace and Security agenda is based on the simple premise that peace is more likely to prevail and hold if women are fully involved in building it.

By the UN’s own metrics, we have not succeeded in moving from rhetorical commitment to transformative practice on the ground.

Syria offers a vivid reminder of how we are falling short of our commitment. Gender-sensitive humanitarian response and peacebuilding will only result from deliberate planning and dedicated personnel holding us all to account. We cannot just hope for the best and expect anything more than haphazard results.

Women activists in Aleppo, while not at the stakeholder table in Geneva, are not waiting for an invitation to advance peace and security at home: they volunteer at field hospitals under bombardments, continue to run schools and advocate for the rights of girls. “Perhaps this is a silver lining,” Maimona, a Syrian activist told the PRI’s The World. “When we started the Syrian revolution, it was also a revolution for women. And when the war is over, women’s accomplishments will remain.”

Will respect for Syrian women’s humanity have room at the table when the peace process restarts yet again next month?