Writing in the Guardian… 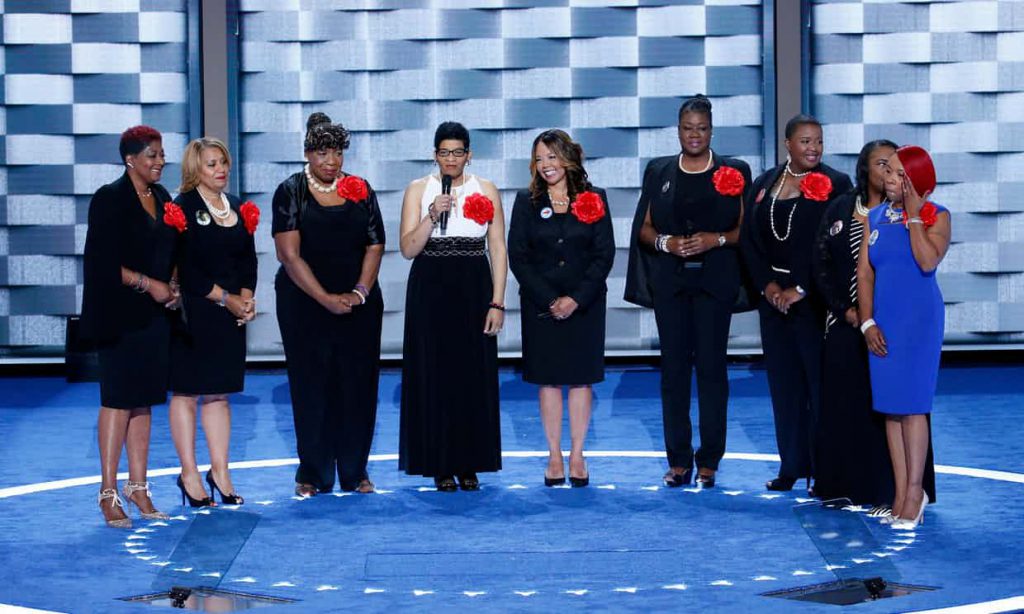 Hillary Clinton made history as the first woman to win a major political party’s nomination for president this week, a breakthrough moment that was hard-won and warranted celebration.

But there is a tendency to call progress for one set of voters a victory for all who are marginalized – and it isn’t. We cannot call this step forward a win for women if progress does not include black women, whose graceful leadership drives the Democratic party forward in spite of continual marginalization, lack of resources and underrepresentation.

We are overdue for a Democratic party that respects and places black women at the center of power. Now, we’re on the margins, only remembered and tapped in moments of crisis or pain, our presence demonstrating both what is possible and representing the gap we must overcome in order to honor the true potential of this country.

No better example of this whiplash solidarity can be seen than in the opening days of the 2016 Democratic national convention. It opened to a party in crisis: the national committee chair, Debbie Wasserman Schultz, was forced to resign from her post amid a scandal. Tapped to step on to that glass cliff, longtime Democratic party leader Donna Brazile assumed the role of interim chair of the Democratic National Committee.

She joined Rep Marcia Fudge of Ohio, chair of the Democratic national convention, and the Rev Leah Daughtry, who is overseeing the Democratic convention for the second time. All three are black women. The symbolism of black women in high-profile leadership positions is significant, but the circumstances which created that opportunity, a crisis precipitated by entrenched leadership and mediocrity, was not lost either.

The most lauded moment of the convention’s opening night was Michelle Obama. Her words were authentic and vulnerable, and she reflected with marvel and awe on the last eight years and spoke to our nation’s potential, its power to overcome obstacles and achieve the seemingly impossible. Our first lady’s full humanity on display brought together a divided audience and marshalled national goodwill – in support of Hillary Clinton.

Then Tuesday afternoon, nine brave women stood on the Democratic convention stage to share how they are turning grief and pain into action and purpose – to get Hillary Clinton elected. The women; Sybrina Fulton, Geneva Reed-Veal, Lucy McBath, Gwen Carr, Cleopatra Pendelton, Maria Hamilton, Lezley McSpadden and Wanda Johnson, represent Mothers of the Movement – women whose children have died through interactions with police or through racial violence.

The moment was emotionally powerful and spiritually generous as these women called on the country to do better. It represented yet another powerful moment where black women’s leadership was centered in the wake of pain, grief and loss only to be summarily disrespected moments later when Obama campaign strategist David Axelrod pontificated on Twitter that it would have been more powerful to have included widows of fallen police officers too.

That’s a disrespect that erases the fact that black victims of gun violence are woefully underrepresented in the anti-gun violence movement, and they unequivocally deserve to be seen on the stage of the Democratic convention.

And most of all, it is a disrespect to the black women who are responsible for his job security. Black women drove the largest voter turnout for Obama in 2008 and 2012, and nearly all of them voted for Obama. Black women’s solidarity with Democratic candidates buoyed the party not just during presidential election cycles but also in critical mid-term election cycle years.

It is the black female electorate who helped smooth the passage of the Affordable Care Act, who rallied against voter ID laws that would disenfranchise communities of color and who raised money for candidates up and down ballots. It is everyday black women’s leadership that continues to hold the Democratic party together.

Electing black women leaders into central power positions, though, continues to be a struggle despite their centrality to the party’s success. California’s attorney general, Kamala Harris, is the only black woman in the running for a United States Senate seat (there are zero black women in the Senate currently). The only other black woman this election cycle to make a bid for a Senate seat, former Maryland congresswoman Donna Edwards, lost her challenge to Representative Chris Van Hollen in a contentious primary battle.

Edwards faced continual attacks from fellow Democrats for citing “identity politics” over the course of the race. It was a puzzling criticism from members of a party that happily cites the importance of identity, like the nomination of the first woman president, when it suits. Edwards lost her primary the same night Hillary Clinton secured a number of delegates that tipped the Democratic nomination in her favor. That election night represented a bifurcated reality for many black women in politics: a glass ceiling was broken, but for whom?

Even black women who attain positions of influence fight to be seen as legitimate. On Wednesday, prosecutors dropped all remaining charges against three Baltimore police officers awaiting trial in the death of Freddie Gray, who was arrested last spring and died in police custody of a severed spinal cord.

Immediately, criticism was leveled at the state’s attorney, Marilyn Mosby, who is black, for being unable to secure a conviction in one of the most closely watched police prosecutions in the nation – even though Mosby’s insistence on pursuing prosecution pushed the Baltimore police department, currently under a Department of Justice investigation, toward necessary reforms and transparency.

Black women do the work of pushing our country forward, from the stage of the Democratic convention to the streets of Baltimore. But we’re still waiting for our own glass ceiling to crack. If we have this much clout from the margins, just imagine what we could accomplish from center-stage.